The Keepers of the Stories 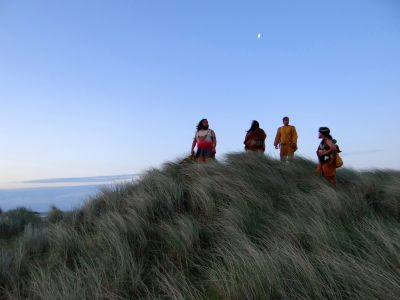 Semi-wild farming in grassy wooded areas instead of the typical manicured pastures marked our path. As we traveled south into Manitoulin Island to Manitowaning, we drove past fields where cows grazed—fields that were as much dotted with rough old stumps and boulders as they were covered with low grass.

We were on our way to visit Debajehmujig, a professional theatre and production company whose production facilities and creative philosophy are hybrid in nature. “Debajehmujig” translates as “Storytellers” from the Cree and Ojibwe language, and Debajehmujig is an organization dedicated to the vitalization of the Anishnaabeg culture, language and heritage, through education and the sharing of original creative expression with Native and non-Native people. These storytellers are active both locally within the far flung community of the Island and internationally in cities like Rotterdam and Glasgow.

They challenge communities to discover how indigenous knowledge is already integrated within contemporary life and can be further interwoven. Debajehmujig has found that traditional teachings used by ancestors and the transition movements required by today’s issues are congruent and complementary to one another. Our basic human needs are still fresh air, healthy food, clean water, and safe shelter.

“We want to share our stories, our characters, our knowledge, our worldview, our fears, and our visions with the rest of the world, so that seven generations from now when we are leaves, there is a greater level of respect among the inhabitants of this land, more honour shown for elders and ancestors, and a better quality of life for our descendants. This means we must commit every day to deepen our relationship with the storyteller within us. As keepers of the stories, our very survival depends upon it.”

The celebration of indigenous power, the survival of aboriginal identity, and the protection of the natural environment go hand in hand: the three can’t be easily separated. The Idle No More movement became one of the largest Indigenous mass movements in Canadian history inspiring thousands of people to action, committing themselves to ongoing resistance against neo-colonialism, especially the protection of land and water. What can we all do to foster the vitality of our natural resources and of aboriginal identity? The first step is to listen to stories of resilience.

We were welcomed by Carla Ritchie, a playwright who has worked previously in Toronto and Calgary and has recently joined the team. She ushered us into the former general store that is now Debajehmujig’s Theatre Company headquarters. The lobby is hung with hand-painted banners featuring elders like the artist Daphne Odjig and language keeper and educator Marjorie Trudeau. Carla toured us through activities and spaces ranging from their seed exchange, animation studio, soon-to-be industrial kitchen, editing suites, studio (complete with a sound and lighting control booth), green room, recording studio, visual art room, library of indigenous writing and music, and their greenhouse where they are propagating heritage tomatoes, beans, and peppers for their on-site planters and nearby garden plots. They built the greenhouse themselves with tree trunks pulled from the forest and peeled of their bark. Debajehmujig’s commitment to nourishing life and nurturing culture are visible in every aspect of their work.

With Carla, Joahnna Berti, Ron Berti, David (Sunny) Osawabine, and Bruce Naokwegijig, we sat at a long pine plank table in their common kitchen area, the sapwood still oozing pine tar here and there. We talked about how getting in touch with the land makes us think differently about time and space. These folks have been working together for a decade to expand what prosperity means. They use barter economies on the island, they fully integrate the arts into food production and vice versa, and they build local learnings into their travelling productions.

They told us about The Manitoulin Experiment, when in 1836, outright isolation (rather than the more assimilative style of residential schools) was tested by the Canadian government. Lieutenant Governor Francis Bond Head negotiated a treaty with the Odawa and Ojibwe on Manitoulin Island in which they agreed to ‘relinquish respective claims to the Islands and make them property, under your Great Father’s control, of all Indians whom he shall allow to reside on them.’ Under that treaty, they also agreed to allow other Native people to join them. From 1836 to 1860, an ‘Establishment’ was organized on the island at Manitowaning, consisting of a government supported superintendant, doctor, carpenter, and various mechanics, and an Anglican Church-supported clergyman, all to ‘instruct them in the ways of civilization.’ The idea was that all First Nations people in Canada and some from the United States would be moved to Manitoulin Island to control and contain the population. In 1861, the government abandoned the experiment. They realized that the land was quite valuable, and in 1862, they convinced the Island residents to sign the Manitoulin Treaty, which ‘provided 100 acres of land for each native family’.

Like many colonial acts of control, this way of dividing time and space violently interrupted the concept of thinking seven generations ahead: an ecological concept that urges the current generation of humans to live sustainably and work for the benefit of the seventh generation into the future (about 140 years). How do the decisions we make today benefit our descendants seven generations into the future? What will we leave them with?

Debajehmujig’s work in local and international communities as storytellers, nurturers of seeds, and creators of independent theatre productions is based in a deep exploration of place, building new understandings of where we are. They will be in Glasgow, Scotland July 25 to 31, 2014 to create an outdoor performance with 150 community performers as part of the Glasgow 2014 Cultural Programme.