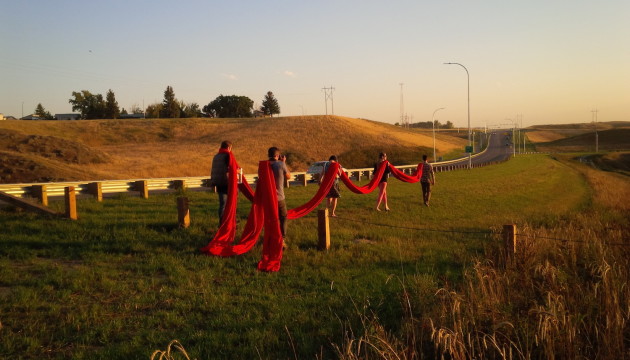 Coulee Edge, Situations & Conditions, a project of the Lethbridge SenseLabs

Musagetes designed the SenseLabs as an experiment to better understand how people make sense of their encounters with art and their participation in artistic creativity. We are interested in the role that art plays as a form of inquiry into the world around us, enabling us to critique current systems and imagine new social structures. Art is about our ordinary lives. Sense-making is the process by which individuals perceive the world around them and make meaning from those perceptions.

The creation of the SenseLabs began with a 2012 Sudbury project by Bik Van der Pol titled Between a Rock and a Hard Place, a series of concerts of various kinds of music that took place throughout the city of Sudbury on rocks blackened by years of pollution from the local mines. Our researcher in that project, Jamie Gamble, spent the day with the participants, talking to them about their experiences, asking them to think deeply about the significance of art in their lives and in their communities. The insightful responses that we received inspired Musagetes to design an focused, long-term program of sense-making and pedagogy: the SenseLabs.

The SenseLabs are our approach to cultural mediation—a process of building bridges between the cultural and social realms to counter the exclusion of a large part of the population from encounters with and participation in the arts. At its core, cultural mediation offers platforms to make sense of our individual and collective experiences with art.

The SenseLabs are a demonstration project within Musagetes’ curation of the Art & Society theme of Cities for People.

We convened the SenseLabs for the first time in Lethbridge, Alberta, a sprawling small city on the vast prairie with the Rockies as a distant backdrop. The artistic life of Lethbridge has the Southern Alberta Art Gallery at its epicentre and we approached them in 2013 about experimenting with us on the SenseLabs. In May 2014 we began. Eight people from different educational, work, and life experiences agreed to participate.

The SenseLabs consist of a series of four labs with the same eight participants in each lab over the course of three or four months. The labs are meant to be challenging for the participants and facilitators, but the pace of work and depth of engagement is determined by the group. The facilitator’s role is to guide the process and the sense-making. The participants come to the labs with a willingness to let go of many preconceived assumptions and with a desire to explore the world. Over the course of the labs, the participants created several artistic works in collaboration with an invited guest artist.

The Lethbridge SenseLab participants invited Jean-François Prost, a Montreal-based artist, to lead the group in the development of a series of public actions. Inspired by the remapping of Sudbury through the roving rock concerts of Between a Rock and a Hard Place, we remapped Lethbridge by exploring sites of conflict, overlooked spaces, contested spaces, and sites of interest through the city. We placed a 20-metre length of red fabric on the sites and transformed them into momentary social spaces for picnics and tea parties. The project is titled Situations & Conditions.

Over the course of ten days in September, and again in mid-November, the SenseLab participants had tea parties and picnics at 17 locations including the median between four lanes of traffic, on a traffic circle, at a mall parking lot, under an electrical structure next to the substation, at the edge of the coulee, at the edge of the suburbs, on a golf course, and so on. We photographed each site and developed a series of postcards that have been mailed to hundreds of people across Canada and beyond. Postcards depicting some neighbourhoods such as Copperwood in West Lethbridge were put in the mailboxes of houses in those neighbourhoods as a form of mise en abyme, leaving a trace of the work behind.

The Situations and Actions project provoked powerful conversations among the participants, as did all of the activities of the SenseLabs. Dr. Muriel Mellow, a sociologist at the University of Lethbridge, joined the group for the entire series of SenseLabs in order to study the development of a creative and perceptive sensibility that progresses toward a greater engagement with the conditions and challenges that we see in the world around us. The research report will be forthcoming in mid-2015.

The SenseLabs: Mapping Ourselves and Our World

The Between a Rock and a Hard Place concert series drew an alternative map of Sudbury. The map made prominent and memorable eleven black rocks that were previously nondescript, nameless, and mundane. The act of performing music on these natural stages endowed them with special significance — it made the sites specific. Two aesthetics merged on that mythic day: the contemporary music culture of Sudbury and the blackness of the rocks that are so much a part of Sudbury’s subconsciousness. Generations of artists, designers, and architects have been influenced by these rocks. Trekking from rock to rock by bus, car, and bike was a cartographic performance, drawing a new map of life in Sudbury and an allegorical map of ways in which we perceive the world and coexist with our fellow humans and all the species of the earth.

The act of mapping is one of exploration; we map in order to discover. In a pedagogical sense, the exercise of mapping is a process of gradual elucidation (clarifying where we wish to go while we are already on our way) and articulation (stating how we will get there). Bik Van der Pol and their collaborators recognized that the black rocks are culturally and aesthetically significant for communities in Sudbury. They drew attention to specific rocks that could tell a story when linked together through diverse forms of music. By experiencing the concert series, the participants of the rock tour mapped the rocks’ locations physically and psychologically. The rocks became legendary.

Maps are also fictions, designed to construct and transform reality. Sometimes this has devastating results, such as we see in the ongoing and endless battle for Aboriginal self-government in Canada. The political boundaries of city, province, state, and nation are colonial fictions with no positive significance for Aboriginals. They have their own maps. The Idle No More movement struggles to bring these maps together into one “sheet of the world.” But maps can also construct new positive realities, providing alternative ways to imagine the world.

Mapping is the thread that links the four SenseLabs, forming a pedagogy aimed at revealing that which can be discovered through our sense perceptions. They are designed as a series of four labs to be completed successively over variable periods of time, like Russian nesting dolls. The labs sequentially progress from individual exercises to collective projects; from observation to analysis and representation; from walking and talking as forms of inquiry to writing, drawing, and performing as forms of articulation; and from private perception to public action. The SenseLabs gradually intensify with collective map-making and publishing projects, using collaboration as a way to build a community of engagement that makes concerns public. They culminate with a performative work that brings their critical inquiry into public consciousness, releasing the transformative potential of heightened individual and collective perception.

SenseLabs 1 and 2 are designed to draw attention to the ways in which we observe and perceive the world and the ways in which we can make sense of those perceptions through artistic acts. By incorporating the reflective, analytical base established in the first two labs, SenseLabs 3 and 4 delve more deeply into what an artistic practice involves as a process of critical inquiry, aesthetic creation, and negotiation. They do this by building on the trust that forms through prolonged shared experience; by moving between outdoor and indoor spaces (public and private); and by encouraging progressively deeper collective expression. For this reason, SenseLabs 3 and 4 require the group to invite an artist or artist collective to collaborate in leading the labs with the participants. Each of the two final SenseLabs will produce a collaborative artistic work over the course of a week or longer.

To download a copy of the SenseLabs workbook, visit our Resources page or write to us if you wish to receive a printed copy.

The SenseLabs are a demonstration project within Musagetes’ curation of the Art & Society theme of Cities for People.