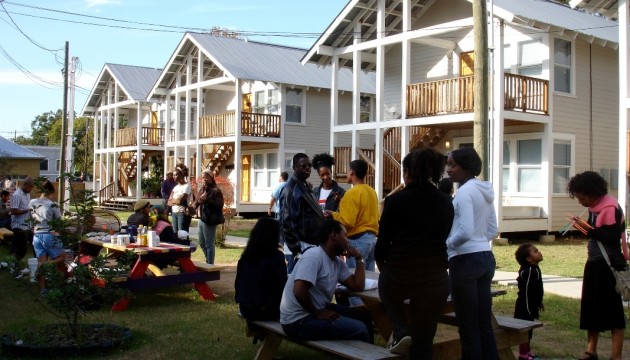 Houston-based artist Rick Lowe is the founder of Project Row Houses, an arts and cultural community located in Houston, Texas. In 1993, moved by the imminent demolition of several blocks of shotgun-style houses in the neighbourhood – one of the city’s oldest African American communities – Lowe came up with a plan to preserve the neighbourhood’s historic homes and provide essential services for its residents. Project Row Houses has created homes for single mothers and their children, residency spaces for artists to create new work with the local community, health centres, community gardens, and more. Originally occupying a group of twenty-two houses covering one and a half city blocks, Project Row Houses has grown to include over forty renovated properties, containing exhibition spaces, a literary center, a multimedia performance art space, offices, low-income housing, and other amenities. More…

Rick Lowe’s work tempts viewers to question what is art and what is community activism. Lowe has professed that a large part of his work includes introducing poetic moments into mundane activities. His work is a demonstration of how art can create an effective community and be integrated into the fabric of everyday life; producing and celebrating culture, being a model for community revitalization and a forum for education, as well as a way to preserve the architecture and history of a neighbourhood.

Lowe’s most recent work is Trans.lation, a public art commission by the Nasher Sculpture Center in Dallas, Texas. For this project, Lowe helped the diverse residents of Vickery Meadow, which includes 35,000 immigrants and refugees from more than 200 countries. Together they organized a pop-up outdoor marketplace that opened in October 2013 and will continue to operate one Saturday per month through February 2014.