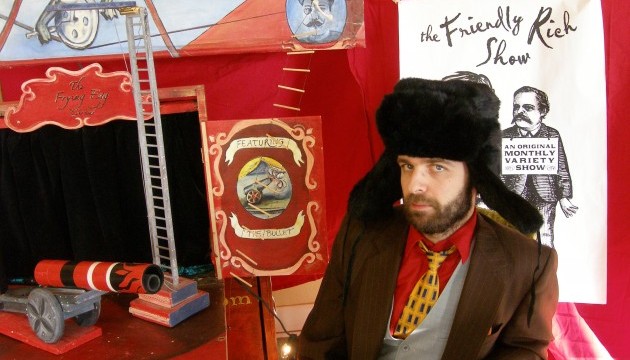 “There’s something special in Guelph, and I want to tap into it and celebrate it with this project.” — Rich Marsella

Musagetes and ICASP are proud to continue the Improviser-in-Residence program, now in its third year. From the moment Jane Bunnett, the first Improviser-in-Residence, undertook the role in 2011 the program has been a resounding success and continues to ignite community interaction, new directions for research, and exceptional musical dialogue. Last year the excitement and dynamic sounds of the program featured three amazing improvisers: first, New York sound artist, Miya Masaoka, who was followed by interdisciplinary artists, Scott Thomson and Susanna Hood. The energy around the program continues to build as ICASP and Musagetes introduce Rich Marsella who will bring his oddball aesthetic to Guelph this summer as the 2013 Improviser-in-Residence. In this role, Marsella will facilitate community impact workshops alongside ensemble musical performances, bringing together new approaches to community building and music-making. Remarking on his role as the new Improviser-in-Residence, Marsella said, “It’s a chance to connect with the City of Guelph in a way that I’ve always dreamed of. There’s something special in Guelph, and I want to tap into it and celebrate it with this project.” Marsella plans to work with as many local organizations and musicians as possible to bring his remix project to life: an innovative and imaginative arrangement of Nikolai Rimsky-Korsakov’s epic piece, Scheherazade.

Rich Marsella, known as Friendly Rich, is a composer/ avant-garde musician from Brampton, Canada. His eclectic music has been featured on everything from the CBC to three seasons of MTV’s The Tom Green Show. Since 1994, Marsella has recorded a great deal of material exclusively for his own distinguished record label, The Pumpkin Pie Corporation. He has produced and composed nine full-length albums to date, with much of his music being featured on CBC radio, as well as MuchMusic. He is the founder and Director of the Brampton Indie Arts Festival, an annual event that promotes emerging artists including musicians, poets, and visual artists, held every year since 2000. With his live ensemble, The Lollipop People, Marsella has signed a deal with German record label, Hazelwood Records, and embarked on three European tours, where they released three records. Currently Marsella is the Director of the Regent Park School of Music, providing a valuable musical outlet to youth-in-need in Toronto. Previously, Marsella had a post in Ottawa as the Artistic Programming Coordinator for the National Capital Commission, helping to see to fruition the Olympic Torch Relay event on Parliament Hill. Marsella has a Master’s degree in music from the University of Toronto, which he completed under the supervision of Dr. Lee Bartel and composer R. Murray Schafer. His main area of focus included instrument construction as well as parade pedagogy. Marsella’s coalescing of community engagement with creative musicianship makes him a perfect fit for the Improviser-in-Residence program.

Ajay Heble, Artistic Director of the Guelph Jazz Festival and Project Director for ICASP, remarked that “an imaginative, inventive, colourful and creative practitioner such as Marsella, with a solid reputation for working directly with the community through music impact projects is at the core of what the Improviser-in-Residence program is all about. Having Marsella work with the project strengthens our commitment to diverse musical multiplicity and collaboration through the promotion of improvisation and dynamic exchange with the cultural, communal, and creative community of Guelph and beyond. It is with keenness for this well-suited collaboration that I welcome Rich Marsella to the Guelph community.” Shawn Van Sluys, Executive Director of Musagetes, comments, “Now that the Improviser-in-Residence program is in its third year, we’re seeing evidence of how artists like Rich Marsella, Jane Bunnett, and Scott Thomson and Susanna Hood build communities through the co-creation of music. Musagetes is committed to continuing this work of making the arts a central part of our lives.”

Throughout the summer of 2013, Improviser-in-Residence Rich Marsella will be directly engaged with the Guelph community through a series of performances, and innovative collaborations with a variety of community-based organizations. The main focus of Marsella’s residence in Guelph will be an installment and tribute to Russian composers, using Rimsky-Korsakov’s Scheherezade as a starting point. Marsella will dramatically rearrange Scheherezade, and rather than the violin, Marsella intends to place electric guitar at the centre of the piece. Marsella comments that he “will treat this piece as a concerto for electric guitar, with as many interesting ensembles as possible to help colour the arrangement.” Marsella imagines a Theremin ensemble, a whistle choir, a turntable ensemble, a ukulele ensemble, a symphony orchestra and more, all coming together with kids of all musical abilities to bring this extravaganza to life. The final piece will bring together a unique community of artists and others from the City of Guelph (and elsewhere) for a culminating performance at the 20th Anniversary Guelph Jazz Festival in September 2013. The concert will be held on Saturday, September 7th at noon at St. George’s Church. As part of his residency, Friendly Rich and The Lollipop People will be performing as part of a monthly concert series at Silence (46 Essex St. Guelph), as well as performing their Halloween concert as part of the Thursday at Noon Concert Series in MacKinnon 107 at the University of Guelph.