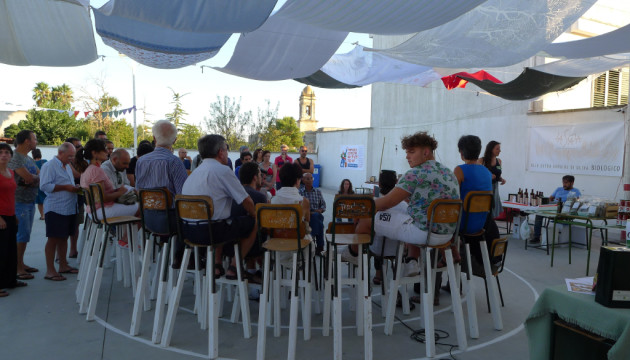 The “Green Night: Agriculture & Sustainable Development” was a not-to-be-missed evening for all those involved in organic agriculture, biodiversity, health and environment, and an attempt to experiment with best practices to improve the lives of people and communities, generating ethical development. This is not so much an event, as a moment of celebration to wrap up a work cycle and open another. The spirit behind the Green Night, in fact, is the result of a daily commitment throughout the year involves the community of Castiglione, engaged in the recovery of abandoned lands to be returned to natural farming practices. It is also the spread of awareness and sensitivity towards the environment and power: the sowing of a group of indigenous plants, the care of the fields and vegetables, research and experimentation on hemp, the actions of preservation and recovery of the rural landscape, the involvement of all generations and the involvement in education, the activation of participatory practices and self-government, are among the various ways that mark a path of continuous engagement. A path that embraces the complexity of our time through discussion, looking for new models and possible solutions within our reach, through dialogue between diverse experiences and knowledges. More…

On Aug 29th and during the 3rd edition of Notte Verde 2014, the Common Orchard (Parco Comune dei Frutti Minori), a project of Free Home University with Casa delle Agriculture from Castiglione d’Otranto and Lecce 2019 inagurated the Mercato Comune dei Frutti Minori, the first farmer‘s market in the Salento area. Organic farmers will bring their produce and a common oven will be installed. Beginning on October 24, it will become a weekly market of organic produce and other products. Thanks to the collaboration with Salento Km0 and Free Home University, in addition to the presentation of the most interesting local producers, the market will be a laboratory and social centre for meetings and seminars to reflect on patterns of development, production and processing, and on economic, environmental and social issues, on biodiversity, and on health. Roundtables have already convened to address issues related to legislation and governance of the commons, community foundational models and generative welfare, effective participatory practices, food design, and community-supported agriculture.

The market was designed by a group of workshop participants led by Alex Roemer from Construct Lab (Paris/ Berlin) and Joahnna Dehio who took the idea for this temporary summertime “draft” of the market from the local tradition of luminarie, an impressive architecture of colored bulbs mounted on wood frames and only sustained by wires held between two or more wooden poles. The same structure was created thanks to a donation of poles and wires, designed and built by resourceful handymen from the community. In order to create a shadowed area, old table clothes, sheets and curtains were collected thanks to a word-of-mouth call among neighbours, and women showed up in the market area with their own sawing machines. With just a few hours of light left in the day, a breezed roof of fabrics was created (together with complementary shopping bags sewn with leftover pieces) and the sunny and exposed cement location was transformed into a vessel ready to sail into the blue sea. Old school desks became tables for the vegetables, and old elementary school chairs were given a new life through the addition of extended wooden legs of different sizes. Three concentric circles on the floor defined the discussion area where the chairs transformed into stools of different heights and arranged to allow circles of discussion. Somebody made a comment that a new parliament was created. The structure, mobile and flexible, was built thanks to the collaboration of many willing people from age 8 to 80+, hosted many animated discussions that held the audience together until dinner time when the agora became the place for dinner, convivial chats and dance floor…

During the 3 days of Notte Verde meetings around biodynamic farming, anthroposophic medecine, food and heatlh, community welfare, foundational economy and inquiries around collective happiness were hosted with invited hosts and local participants.

October 24: reopening of the market; installation of a common oven near the market space where people can bake, eat and celebrate together.

October 25: collective sewing of local grain; extension of the common orchard into other areas, with more trees being planted. Students of the  high school of agriculture in Lecce and Maglie will participate.