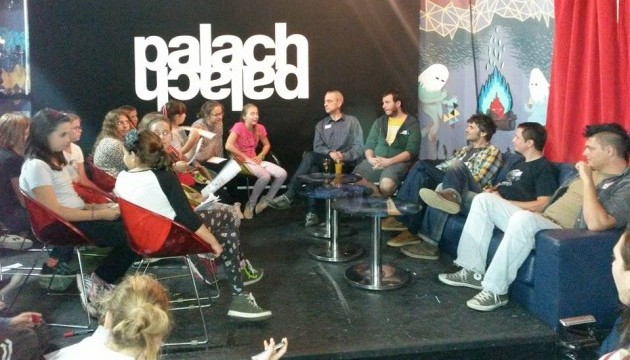 How do we leave our mark on a place, or a city? We leave our trace in so many ways: from the art and music we create, to our voices raised in protest, to the community we build with one another. This month’s meeting of the Benčić Youth Council,“Leave Your Trace” took us to the legendary club Palach.

Klub Palach has been a part of city’s alternative culture scene for almost half a century. Countless young alternative artists found a kind of sanctuary there, where they made their first professional steps and started their careers. Palach represented to many generations a space for exchanging, creating and presenting ideas. Recently, Palach has opened its doors again after almost two years of being closed. This time, the club is a Youth Culture Centre, managed once again by students (Student Culture Centre) but in collaboration with the independent cultural scene (Association Alliance Molekula). The Council learned about the history of the building, its alternative culture, and its working strategies over the course of this workshop.

Why don’t we learn alternative culture in the same measure as pop culture as kids? Why do parents, teachers, and culture workers feel like they have a right to filter culture and decide what is and is not appropriate? Why are we concerned that children will not be able to understand certain material because of its complexity, obscurity, or progressiveness? One of the main goals of Benčić Youth Council is to use an informal approach to education to give young people the opportunity to freely shape and express their opinions and creative ideas through getting to know spaces of cultural or historic significance in their surroundings, and different forms of art. More…

On their journey into the alternative culture of the city of Rijeka, the Council started by familiarizing themselves with the music scene in Rijeka and its pioneers: Zoran Baljak (Student Culture Center), Krešimir Burić (Singer, Krešo i Kisele Kiše), Dorijan Salatić (Singer, Pasi), Velid Đekić (historian, author of the book Red!River!Rock! about the music sceene in the 60s in Rijeka), and Alen Mance (former Palach manager). They set up a talk-show style stage and interviewed their guests about the history of Palach and how their politics translated into music. Next, they got to know the history of street art and its appearance in Rijeka with artists Ines Milčić (Pekmezmed) and Jadranka Lacković (OjoMagico) by painting a nearby wall in Circle Street as well as an inside wall in Palach.

We thought about space: as a gathering place, a place of creation of ideas, a place for expression and exploration. The session also served as an opportunity to meet and practice alternative expressions in art and culture. The workshop was a moment for reflection on the City of Rijeka’s plans to open up a Youth Centre in the Benčić complex. How do we draw from the histories of the students of Palach to defend opinions and create culture? Which needs and activities could that space house?