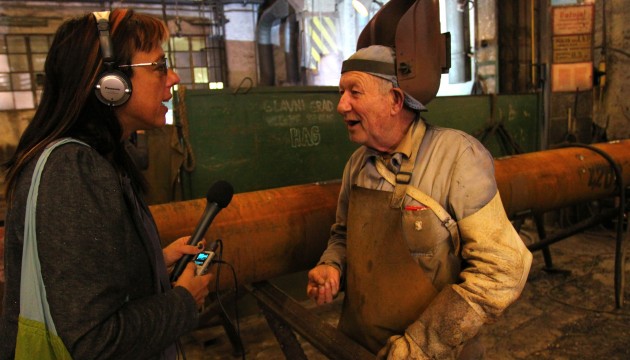 Laetitia interviews a welder at 3.MAJ. Photo by Dean Miculinic

Laetitia Sonami is a sound artist based in Oakland, California. As a sound-instrument inventor and a creator of immersive sonic environments, she has, and encourages others to have, a ‘sonic curiosity’ in the form of ‘sonic harvesting’—an approach to field recording and an inquiry into the social, historical, and political contexts of the ‘harvested’ or recorded sounds. More…

In 2010, Musagetes convened the Rijeka Café. One of the purposes of the café was to establish a conceptual frame within which to invite artists to work with Musagetes, the City of Rijeka Culture Department, and various cultural and social collaborators. The pier emerged as the main site of interest with its layered significance historically, spatially, symbolically, and metaphorically. For a century, the pier was Rijeka’s global connection, a major employer, and an industrial icon. It was off-limits to the public but it was always visible, always in mind—a protective shield and a monument. Now the pier, as a new public space, is literally a new place from which to view the city and therefore a new way metaphorically to see the city. And so the pier became the nucleus of Musagetes’ artistic program in Rijeka in 2011 and 2012.

Laetitia arrived in Rijeka with eleven cassette recorders and lent them to students at the Gradjevinska Tehnička Škola, a high-school arts academy. At first the students were shy about conducting interviews, but with growing confidence they  Laetitia added their sounds to her expanding archive of Rijeka field recordings that became the material for three projects:

Sound Gates (2011) was the first artistic installation to animate the pier in its post-industrial state. Laetitia reimagined the bases of the cranes—the top parts were removed in 2010 for restoration—as symbolic gates welcoming residents to the new public space. She installed and camouflaged four homemade speakers—made of aluminum buckets and simple electronics—on each corner beneath the crane structures. An audio player was connected to motion sensors and a random selection of sounds quietly emanated from above when walkers activated the sensors. The sounds were recorded by over 600 people, including many students who talked to people walking on the pier, to fishermen, and to other young people hanging out by the water.

The power of sound lies in its potential for displacing the ordinary—its immediacy in our consciousness and its gradual lending of coherence to our understanding of place. The sounds ‘showering’ from Sound Gates were a combination of voices—conversing, singing, laughing—and recognizable sounds of the city—of metal in the shipyard, church bells, the bustle of the Korzo, and the creaking of swings in the playground. Sounds are also strongly connected to memory, reminding us of events in the past that were once familiar.

Laetitia was not interested only in the side of the pier that faces the city: “I came to think of the pier as a double-sided mirror, reflecting the city and its rich industrial heritage—its sounds and voices—and also a projection space onto the open Adriatic sea, gazing outwards.” Her second project on the pier, titled Invisible Sea (2011), did exactly that: it was an oculus for sonic ‘gazing’ at the sea.

Walkers on the pier only have a view towards the city; the view of the sea is obstructed by the high wall of the breakwater so Laetitia brought the sea sonically to the other side of the wall through a series of listening tubes. She reflected on the project later:

“I thought of several strategies to allow people to look over the wall but ended up choosing a reverse gesture: the sounds of the sea are carried over the wall. These tubes function somehow as ancient ships’ voice tubes. They are towards the end of the pier which is a more quiet and intimate section of the pier. The tubes carry the sounds of the water lapping on the rocks from the other side. They require one to stop and pay attention to the sounds that can become barely noticeable but appear as strange voices and gurgling underwater spirits!”

Laetitia returned to Rijeka in April and May 2012 for a second residency—this time with a specific interest in the imminent demise of the 3.MAJ shipyard. With the closure of dozens of industries in the 1990s, the loss of this hundred-year-old shipbuilding company will devastate the workforce, collapse the region’s economy, and markedly transform Rijeka’s identity. Laetitia, with the collaboration of photographer Dean Miculinic, installed a photo- and sound-installation at Buddha Bar, a defunct art club housed in a building managed by the City of Rijeka Culture Department. Titled after the shipyard, the installation consisted of five large photographs of 3.MAJ workers with recordings of the sounds of 3.MAJ—the crackle of welding, the clanging of metal, the reverberant booming of massive colliding objects, as well as emotional stories of retired miners, the story of the only female welder, and stories of workers wary of the future.

As the Café participants recognized, Rijeka’s pier is a place for deep thinking and for healing—a monument that, when animated through works of art, makes it possible to relinquish fear, check social regression, and take hold of the city’s transitional state of affairs as an opportunity for the betterment of our humanity. What new resonances did the artistic gestures on the pier create for Rijekans? Whose imagination was attuned to these experiences? What new possibilities will transform the city? Time and attention will tell. Musagetes takes the long view.

3.MAJ at the Buddha Bar shifted attention momentarily to the continual loss of so much of the city’s collective experience. Laetitia created a space for nostalgic contemplation, a sonic displacement of the ordinary—an immersion in beauty and a melancholic, almost elegiac, celebration of 3.MAJ. This project also had a greater urgency in its presentation than Laetitia’s previous work—likely a result of her observing the increasing urgency of Rijeka’s condition between November 2010 and April 2012.