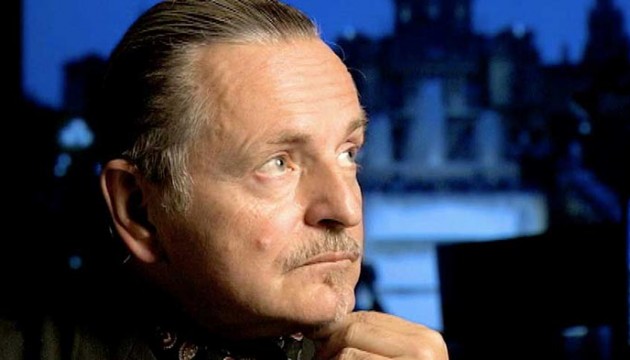 Krzysztof Wodiczko (born Warsaw, Poland, 1943) is known for his large-scale slide and video projections on architectural facades and monuments around the world, as well as his nomadic instruments and survival vehicles for migrant workers, the homeless, and war veterans. War, conflict, trauma, memory, and communication in the public sphere are some of the major themes of his body of work.

Wodiczko emigrated from Poland in 1977, establishing residency in Canada teaching at the University of Guelph. He began developing public projections in 1980, projecting images of the human body onto the facades of urban architecture (public monuments, public buildings, corporate architecture). More…

Perhaps the artist’s best-known and most popular intervention was a projection originally created for Nelson’s column in Trafalgar Square, London in 1985. Wodiczko turned one of his projectors away from Nelson’s column to project a swastika onto the pediment of the facade of South Africa House, the South African diplomatic mission to the United Kingdom, in response to the daily anti-apartheid demonstrations that were then taking place in front of the diplomatic mission. He has produced 80 large-scale public projections in Australia, Austria, Canada, England, Germany, Holland, Ireland, Israel, Italy, Japan, Mexico, Poland, Spain, Switzerland, and the United States. In explaining the potential of cultural projects in the public sphere, the artist writes: “I try to understand what is happening in the city, how the city can operate as a communicative environment…It is important to understand the circumstances under which communication is reduced or destroyed, and under what possible new conditions it can be provoked to reappear.”

Krzysztof Wodiczko lives and works in New York City and teaches in Cambridge, Massachusetts where he is currently Professor in Residence of Art, Design and the Public Domain for the Harvard Graduate School of Design. He was formerly director of the Interrogative Design Group at the Massachusetts Institute of Technology (MIT) where he was a professor in the Visual Arts Program since 1991. He also teaches as Visiting Professor in the Psychology Department at the Warsaw School of Social Psychology.

Wodiczko was the subject of Derek May’s 1991 National Film Board of Canada documentary Krzysztof Wodiczko: Projections, and he has been the subject of numerous publications, including Critical Vehicles: Writings, Projects, Interviews (1999), Krzysztof Wodiczko: Guests (2009), and City of Refuge: A 9/11 Memorial (2010). He was awarded the Hiroshima Prize in 1998 for his contribution as an artist to world peace. He is also the recipient of the Skowhegan Medal for Sculpture, the Georgy Kepes Award, the Katarzyna Kobro Prize, and the “Gloria Artis” Golden Medal from the Polish Ministry of Culture. In 2009 he represented Poland in the Venice Biennale, developed the War Veteran Projection Vehicle in Liverpool, the Veterans’ Flame project at Governors Island in New York, and presented the “Veteran Project” (an interior video-projection installation) at the ICA in Boston.