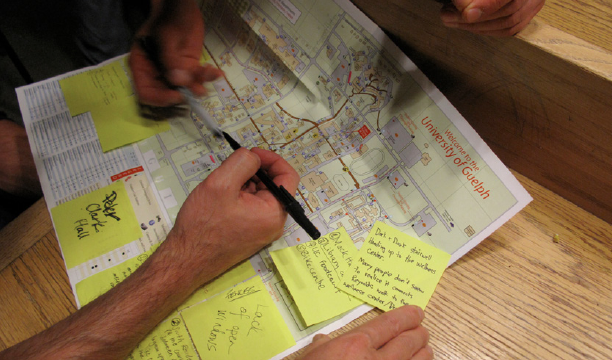 Over the span of three visits to Guelph, SYN – atelier d’exploration urbaine (Jean-Maxime Dufresne, Jean-François Prost, and Luc Levesque) designed and led a series of inter-disciplinary workshops for students that explored the campus at the University of Guelph.

Workshop participants considered the campus as a site for experimentation, for reimagining as a flexible framework, for tracking spatial tensions, and for creative forms of appropriation. They began by asking themselves: How can undisclosed and hidden realities inform future potentials for campus transformations? And how can we engage the campus as a locus for fostering new kinds of actions, social configurations, and interrelations in common space? More…

During their second visit, they co-taught a course with students from both the Landscape Architecture Program and the Studio Art Program at the University, which put to the test these theories. Each student created a public intervention on campus that activated, questioned, and drew attention to those spatial conditions.

During their final visit, a combination of previous and new participants updated, cut, pasted, illustrated, and synthesized the research into a set of seven published zines, which were distributed across the university campus.

The campus is located 2.5 kilometers from the downtown core, and is at a higher elevation, prompting the use of the term “up the hill” to describe its location. Guelph and its University are somewhat accurately described as “town and gown”. “Town and gown” is an expression that denotes the two distinct communities that can develop in a university town; “town” being the group of citizens unaffiliated with the academy, and “gown” referring to university community itself: students, faculty, and staff. As part of our work to build strong communities with art, Musagetes’ offers opportunities to bridge these two groups of Guelph residents. One example is The Mulch Project and another is INFRACAMPUS. More…

INFRACAMPUS considered social dynamics and connectivity in a specific architectural setting: the North American University campus. It revisited and remixed notions of the historically “cultivated” campus and its idealized detachment. It altered by self-initiatives and experiments and provided alternate uses or introducing creativity and participation processes in existing services like food production, on-site maintenance and security.