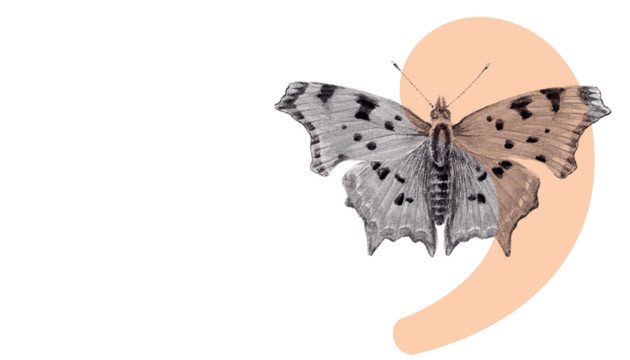 There is a species of butterfly—found often at rare—that bears on its wings a writer’s best friend: the comma. It flies about the fields of asters and black-eyed susans, flutters in the community garden, and hangs out near puddles on the walking trails. With the comma always at its side, the Eastern Comma butterfly measures the shape of its world—just as the writer does—adding a clause here, inserting an adjective there, offering, with words and dashes and commas, a vision of the world.

That’s why this butterfly inspired the name of a long-term initiative at rare Charitable Research Reserve: the Eastern Comma Artist-in-Residence. Since its initial inception as a writer’s residency, the project has broadened its scope to include Indigenous artists working in any—or across—disciplines. Each year in September and October, an accomplished Indigenous Canadian artist will be invited to live and work at North House for two months. During that time, the artist will explore an element of their practice while interacting regularly with the community of people who are present at rare including gardeners, educators, students, artists, botanists, ecologists, geologists, archaeologists, and historians.

Our 2019 Artist-in-Residence was Bonnie Devine. Devine is a member of the Serpent River First Nation, an Anishinaabe/Ojibwe territory in central Ontario on the north shore of Lake Huron. She is an installation artist, painter, curator, writer, and educator. Her work emerges from a deep interest in and commitment to the storytelling and pictorial traditions that are central to the history and development of Anishinaabe culture. These interests are central to her art practice and are expressed in image and object, video and teaching, storytelling and political ideas. During her residency at North House Bonnie explored a new direction in her art practice through printmaking in collaboration with the plants and the land at rare. She also took time to run workshops with local students at the Slit Barn, which is part of rare‘s land trust.

Our 2018 Writer-in-Residence was Kahsenniyo Williams. Williams is a spoken word artist from the Mohawk Nation Wolf Clan. Kahsenniyo began utilizing her poetry as a tool for social change and community engagement in 2008. Her work is centred around Indigenous issues. She aims to educate non-Indigenous people about the struggles, beauty, and realities facing Indigenous people. Her work also attempts to create moments of understanding, connection, and healing for Indigenous People. Kahsenniyo transforms her love for her community and people through her passionate performances. She draws on her lived experience to engage audiences. In 2017, Kahsenniyo performed at Triple Indigenous, the closing reception of Janet Rogers’ residency, alongside Ms. Rogers and Tenille Campbell. A video was captured of Kahsenniyo’s performance at the closing event of her residency, which was held at Woodland Cultural Centre.

Our 2017 Writer-in-Residence was Janet Rogers. Janet Marie Rogers is a Mohawk/Tuscarora writer from Six Nations. She was born in Vancouver, British Columbia, lived in Stoney Creek, Hamilton, and Toronto, and has been living as a guest on the traditional lands of the Coast Salish people (Victoria, British Columbia) since 1994. Janet works in the genres of poetry, spoken word performance poetry, video poetry and recorded poetry with music. Janet is also a radio broadcaster, documentary producer, media and sound artist. You can view a video of Rogers reciting two of the poems that she created during the residency here.

Our 2016 Writers-in-Residence were Marlene Creates and Don McKay. Creates is an artist, poet, community arts activist, environmentalist, and educator who lives and works in Portugal Cove, Newfoundland. For over thirty-five years, her artistic practice has been an exploration of the relationship between human experience, memory, language and the land, and the impact they have on each other. Don McKay is the author of many books of poetry, including Long Sault (1975), Birding, or Desire (1983), andApparatus (1997). He has twice won the Governor General’s Award—for Night Field (1991) andAnother Gravity (2000), and in June 2007 he won the Griffin Poetry Prize for Strike/Slip (2006). In 2008 he was made a Member of the Order of Canada “for his contributions to Canadian literature as a nature poet and mentor of many emerging writers from coast to coast.” He lives in St. John’s, Newfoundland.

Our 2015 Writer-in-Residence was Lee Maracle.  Maracle is the author of a number of critically acclaimed literary works including Sojourner’s and Sundogs [collected work of novel and short stories]; Celia’s Song [her latest novel]; Ravensong [novel], Bobbi Lee [autobiographical novel]; Daughters Are Forever, [novel]; Will’s Garden [young adult novel]; Bent Box [poetry]; and I Am Woman [creative non-fiction]. Maracle is the co-editor of a number of anthologies including the award winning publication, My Home As I Remember. She is also co-editor and contributor of Telling It: Women and Language across Culture [conference proceedings]. Maracle is published in anthologies and scholarly journals worldwide.

The 2014 Writer-in-Residence was Karen Houle, a poet and philosopher at the University of Guelph. Since her residency, she was invited to speak about that experience in a Keynote Lecture at the International Conference Forms to experience the environment. Theory, experience, aesthetics and political criticism (Paris, October 1-2, 2015).  Her lecture is titled “Co-building environmental poems (ecopoetry) with, and for, different audiences and users.”

The Eastern Comma Writer-in-Residence is a joint initiative of Musagetes and rare Charitable Research Reserve, founded by their mutual benefactors, Michael Barnstijn and Louise MacCallum. Musagetes is a philanthropic artistic organization based in Guelph with a mandate to make the arts more central and meaningful in peoples’ lives. Working in small cities in Canada, Italy, and Croatia, Musagetes creates intersectoral collaborations between artists and communities. (www.musagetes.ca/musagetes-old)

Eastern Comma will immerse writers in the landscapes and environments of rare and North House, an oasis literally in the crossroads of conservation, urbanity, industry, high-tech, agriculture, the arts, environmental sustainability, watersheds, gardens, and gravel pits. In addition to the writer-in-residence, Eastern Comma will convene symposia and literary gatherings, organize school trips, and establish post-secondary partnerships. Over the next few years we intend to establish an Eastern Comma publishing program with PS Guelph, a print-on-demand publisher that celebrates ideas and the social life of books.

North House is literally a house. It was designed and built by architecture students at the University of Waterloo, Ryerson University, and Simon Fraser University as Canada’s entry to the prestigious US Department of Energy Solar Decathlon in 2009. With the capacity to produce twice as much energy as it consumes, the high-tech North House is permanently located at rare as a research and education facility. While in residence over the next few years, the writers will share their experiences of living in such a leading-edge house, complementing scientific research into the mechanical systems of the building. This will be an invaluable contribution to our understanding of how we might live in the sustainable houses of the future. More…

rare Charitable Research Reserve
Founded in 2001, and located at the confluence of the Grand and Speed Rivers, rare Charitable Research Reserve is home to an incredible diversity of flora and fauna, and is an urban land trust located in Waterloo Region. With 900+ acres of natural landscape, rare offers the community, including the international community and future generations, a natural area, protected intact and in perpetuity. The reserve’s natural landscape provides historical and archeological evidence of human occupation for over 10,500 years and is a common possession set aside for its ecological value and to provide unprecedented opportunities in ecological and cultural research, education, and passive recreation. We have three foci: conservation, research and education. Our activities are guided by scientific observation and findings of our environmental research; the success of our three-fold mission linked to effective and varied communication and language. These fields of study have developed along the lines of scientific complexity of process and interaction between organisms and the physical environment. New ideas are emerging as we strive to include the human element by examining the role of humans within the ecosystem and development of novel ecosystems. In this we need also to move beyond a solely scientific or logical positivist framework and take into account human conceptualization and expression in the exploration of ecosystem. Language and communication in varied forms are essential to our successful outreach, furthering our conservation, research, and education aspirations. At rare we welcome with this novel writer-in residence initiative that will further the human-ecosystem connection.

North House was designed as an entry in the 2009 United States Department of Energy Solar Decathlon. The University of Waterloo School of Architecture led an interdisciplinary team with student and faculty members from the School of Architecture and the Faculty of Engineering at Waterloo, as well as students and faculty members from Ryerson University and Simon Fraser University. Team North finished fourth in the competition. North House now has a permanent home at rare Charitable Research Reserve to be used for research and education. It is a public venue for visitation and knowledge dissemination, introducing the public to alternate ways of living, alternate ways to engage with our interior and exterior environments, allowing public to correlate broader environmental issues with the way we go about our daily lives. In research at rare, it is a prototype to test systems and assemblies; to monitor its performance under a range of real-life conditions.

North House has been called a living lab to be used to continually test the limits of performance of systems and materials, investigating new and innovative technologies, and to develop a set of responsible parameters for the design of homes in the natural and urban landscapes. In this light, the sense of North House as a deliberate human habitat, in all its unique physical and esoteric attributes, can only be fully experienced and sensed in a full-time residency. Our hope is that that novel sensibility will give rise to some element of the creative process. Along with this benefit, North House residency also presents an opportunity to explore the human experience in an urban-nature interface.

Selection Process
For the first three years the writer was selected and invited by the organizing committee. Given the limited availability of this opportunity (one 2 month slot is available each year) unsolicited applications for the residency were not accepted. In 2017, the committee offered an Open Call for Writers, reserving the right to solicit select writers. Invited writers were requested to submit a short text on why they are interested in southern Ontario, ecology, the rare site, and North House. Since 2018 the residency has focused on inviting Indigenous artists.

Logistics
These residencies offer participants the ability to delve into their work two complementary ways: as part of the research environment of rare Charitable Research Reserve and as a solitary retreat for focused work. We hope that visiting artists will contribute significantly to culture and the arts in the tri-city area, Ontario, and Canada. Artists are invited to the Eastern Comma Artist-in-Residence program for two months at a time. They are expected to participate in public events connected to rare. SOME EXAMPLES MIGHT BE: giving guest lectures, hosting other guest artists, holding readings or workshops, and/or writing articles for newspapers or magazines. Participating artists are expected to be present on site for two months without any major absences of more than 4 or 5 days.