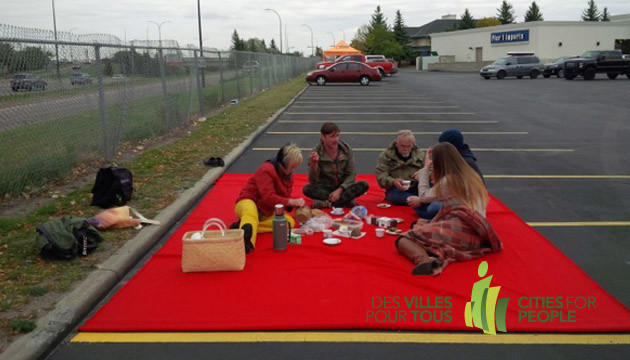 SenseLabs participants convene on a red cloth in the parking lot of a downtown mall (Lethbridge).

Cities for People is a broad national movement that aims to make our cities more resilient, livable, and inclusive. It was launched in early 2014 by a consortium of organizations from philanthropy, the arts, environmental activism, citizen engagement, and alternative economies. Four themes emerged, each one led by an organization that is curating a set of relationships, demonstration projects, and learning opportunities.

Musagetes is the curator for the Art and Society theme, along with co-curators Ryan Doherty (Director/Curator, Southern Alberta Art Gallery), Todd Lester (artist and analyst, World Policy Institute), and cheyanne turions (independent curator and writer). The other themes include:

Cities for People understands each city to be a unique ecosystem, and like any ecosystem, a city’s strength and resilience depends on its ability to nurture the full diversity of its inhabitants and give them what they need not just to survive, but thrive. Cities for People sees every city as an invitation: an invitation for interaction, innovation, change, inclusion, learning, love and growth; to come up with new ways to make the cities we live in support how we would like to live.

Follow the Cities for People blog for weekly contributions by dozens of writers from many fields.

Listen to a discussion about Cities for People on The Secret Ingredient (CFRU 93.3FM), October 15, 2014:

To anchor the work of Cities for People in city-based experiments, the Art and Society co-creative team has initiated or is supporting a collection of projects in Guelph, Ontario and Lethbridge, Alberta.

People of Good Will

Postcommodity, Musagetes, and the Guelph Black Heritage Society are developing People of Good Will, a program of artistic activities at Heritage Hall that focuses on bringing together audiences that are underserved by Guelph’s current arts offerings. The program is co-developed by a diverse team who are connected to First Nations, immigrant, and impoverished communities. The program launched with a ‘feast’ in late September. The experiment focuses on methods of co-creation among and between diverse, under-represented communities.

The Improviser-in-Residence, a partnership with the International Institute for Critical Studies in Improvisation: Dong-Won Kim, Korean percussionist is residing in Guelph from mid-August to mid-December. He is leading dozens of workshops with community groups (everybody from seniors’ homes and KidsAbility to professional musicians at the U of G). Through these workshops, he will accumulate a large team of people who will present a major public improvised music performance on November 29. This experiment looks at cocreation in a different way from the Postcommodity project in that it uses music as a form of communication; over the past few years we have seen improvisation as a central way by which communities come together. Silence, a musician-initiated space in Guelph, is a further component of this. Adding a new dimension to the residency program this year, we are partnering with the Laurier Centre for Music in the Community at Wilfrid Laurier University to have a portion of the residency take place there. Past improvisers-in-residence have worked with KidsAbility, Give Yourself Credit High School, Homewood Mental Hospital, and numerous others.

In early 2013, musician Ben Grossman used his own resources to open Silence, Guelph’s portal for adventurous new sound events: experimental, improvised, noise, ambient, installations, sound art, outside electronica, found objects, computer music, handmade music, post rock, psych, and freak music. Silence has a monthly concert series, Monday-morning improvisation sessions, and handmade music nights and workshops. It is an open room of about 670 square feet located in downtown residential neighbourhood. Silence has become a critical hub for community engagement and collective creation. It is a model for cultural spaces that connect diverse communities and bridge cultures. With Cities for People, Silence is a demonstration project, studying the role it plays in the neighbourhood, its capacity to cultivate new audiences for co-creating improvised music, and for engaging people in the wondrous act of making sound and music.

The SenseLabs, inspired by our work in Sudbury and implemented for the first time in Lethbridge, are designed as an experiment to better understand how people make sense of their encounters with art and their participation in artistic creativity. The SenseLabs, with eight participants selected from diverse backgrounds, are designed as a series of four labs to be completed successively over variable periods of time, like Russian nesting dolls. The labs sequentially progress from individual exercises to collective projects; from observation to analysis and representation; from walking and talking as forms of inquiry to writing, drawing, and performing as forms of articulation; and from private perception to public action. The SenseLabs gradually intensify with collective map-making and publishing projects, using collaboration as a way to build a community of engagement that makes concerns public. They culminate with a performative work that brings their critical inquiry into public consciousness, releasing the transformative potential of heightened individual and collective perception. In Lethbridge, the participants are working with Jean-François Prost, a Montreal-based artist, to explore unused sites and spaces of conflict in the city. As a pedagogical project we are now developing new SenseLabs for other contexts, including an art & ecology-focused SenseLab for the rare Charitable Research Reserve in Cambridge.

The Resilient City Project in Lethbridge is a series of walks in and around the city that focus on specific components of urban resilience. The walks are led by artists and scientists. Each walk has been documented in a 5-minute video which will be available in November 2014. So far, five walks have been held:

The Southern Alberta Art Gallery began the Into the Streets program a few years ago when the gallery closed for two seasons while they undertook a major renovation. They brought art out into public space, engaging new publics that are otherwise very hard to reach. With Cities for People, SAAG curated a new version of Into the Streets for 2014. Jenna Swift, a community facilitator, is animating each of the projects by engaging new audiences in conversation and in projects.

In addition to the artistic program, Musagetes is also convening different groups to talk about the transformative value of the arts and the ways that the arts make our cities more livable, inclusive, and resilient.