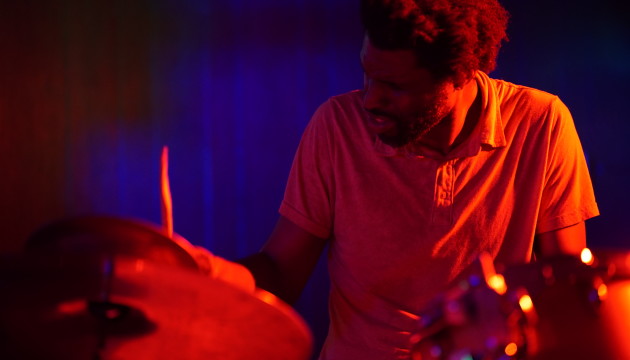 Black Spirituals' Marshall Trammell at the Kazoo! Fest Concert with People of Good Will, April 2015. Photo by Kade Twist.

At the end of a long cold grey winter, three performers take the stage at Heritage Hall as part of Kazoo! Fest’s diverse weekend of music shows and art events. People of Good Will and Kazoo! Fest are excited to announce that Lido Pimienta and Black Spirituals will be performing music as part of the ongoing POGW events and Kazoo! Fest’s annual festival. This concert will take place on Saturday, April 11, 2015 at 8 PM at Heritage Hall. Please join us for food and beverages starting with Lido Pimienta at 8pm and Black Spirituals starting at 9 PM. Heritage Hall is not yet physically accessible.

Black Spirituals is a collaboration between Marshall Trammell and Zachary Watkins, two soloists from Oakland who are freshly off tour supporting EARTH. Twisting buzzing drone strings with soft distortion, they are able to weave together songs that sounds like they are both being formed and yet unraveling at the same time. Trammell’s multi-aesthetic acoustic percussions conjugated with Watkins use of electronic modulation produces an infused sci fi-like soundscape that grounds you here while taking you somewhere else. Steeped in a history of the underground railroad, their music has rung out in a number of Black Churches in the states. This Kazoo! Fest will see them playing their first show in Canada in the Heritage Hall Building, a church built by expatriated slaves, offering up a contemporary narrative to the underground railroad route system

Lido Pimienta is a Colombian musician and visual artist now residing in Toronto. Pimienta infuses analog synths, electronic beats, Indigenous sounds, Afro-Colombian riffs, and primordial crooning. Her haunting voice invokes an age-old narrative of the human condition. Pimienta ties together new sounds with her musical roots, and distant ideas with the local. She both challenges and unites her audiences on contemporary stereotypes of nation, gender, and race with the power of her voice, all against the eclectic dance-able live performance backdrop.