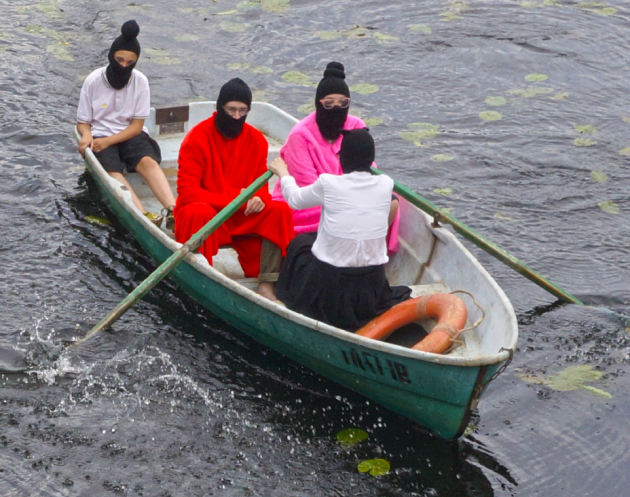 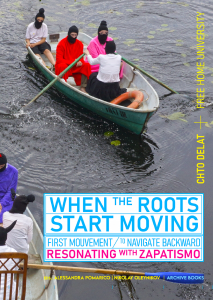 The book, When the Roots Start Moving, explores predicaments of rootedness and rootlessness, and notions of belonging and displacement across geographical and epistemological coordinates. Throughout the essays, Zapatismo—the insurgent movement of Indigenous peoples from Chiapas (Mexico)—emerges as a form of belonging, a home (or a homecoming) for hopes and political imaginaries, providing a place to learn from and with. This book, without romanticizing or objectifying the Zapatista struggle toward Autonomy, offers some perspectives on the Zapatistas’ movement, on their poetics and politics within an Indigenous cosmovision and cosmopolitics in relation to the current global ecological and social crises.

The book extends the research and practice of artistic collective Chto Delat, which has long since explored Zapatismo (through its long-standing connections to the Zapatistas) as a lens to self-reflect, reminding us of how the Zapatistas continue to inspire those who are looking for emancipatory tools: through art, language, radical pedagogy, and conviviality—as a practice of commoning and collectively reimagining an otherwise.

The event will begin with a screening of People of Flour, Salt, and Water, a film by Chto Delat, as part of their ongoing Zapatista film trilogy. The film unfolds amidst multiple struggles in the Salento region of southern Italy: that of local farmer-activists who are protecting and regenerating their land, producing forms of sharing and commoning; that of refugees and people who migrated and experienced displacement; and that of young artists and activists trying to make sense of it all. Zapatismo was the lens through which Free Home University participants analyzed their own stories, conditions, and possibilities. A central part of the film is a large, painted imaginary table-top map titled A Land We Can Call Our Own, featuring rivers, mountains, fields, and the sea populated by characters and sets made out of dough. This land and its fragile inhabitants become the backdrop for stories and relationships, intertwining with those of the participants, resulting in a film that is a fiction deeply grounded in their lived experience.

Alessandra Pomarico is a co-founder and curator of Free Home University, an artistic and pedagogical initiative. She is a writer and educator working at the intersection of arts, pedagogy, social issues, and nano-politics.

Nikolay Oleynikov is an artist, punk, antifascist, contributor to the artistic collective Chto Delat, and band member of Arkady Kots. He is a co-curator of Free Home University. 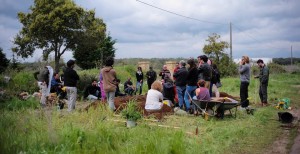