When Rivers Meet: The Culminating Performance of Dong-Won Kim’s Residency, November 29 at 7 PM 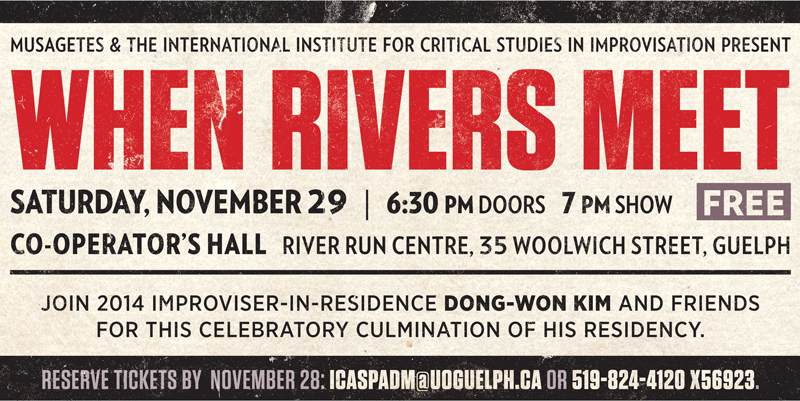 As the snow drifts down outside, come join us in the fiery glow for the culminating performance of Improviser-in-Residence Dong-Won Kim’s time in Guelph. On Saturday, November 29 at 7 PM, local and international musicians and dancers will take the stage at the River Run Centre.

From the moment he was invited to be the 2014 Improviser-in-Residence, Korean percussionist, pedagogue, vocalist, composer, and improviser Dong-Won Kim began imagining how he would mark his time in Guelph. Throughout four months of workshops, collaborations, and friendships, he thought constantly about a final celebratory performance at the end of his time here. This performance, When Rivers Meet, combines principles of traditional Korean music and dance with a North American sensibility. The performance will feature the Guelph Symphony Orchestra (with Artistic Director Judith Yan), the Guelph Youth Jazz Ensemble, dancer Georgia Simms, and musicians Daniel Fischlin, Jeff Bird, and Lewis Melville. Musician Ben Grossman will play the role of storyteller. Anchored by adaptations of stories from around the world, When Rivers Meet brings together musicians, dancers, storytellers, and the audience in a shared creative act of collaborative improvisation.

The location is physically accessible and admission is free. Tickets are available on a first-come, first-served basis. The theatre has a limited capacity, so book your tickets early by sending an email no later than November 28th at noon to Rachel at icaspadm@uoguelph.ca or call 519-824-4120 x56923. There might not be any tickets left at the door.

Musagetes is an international organization that strives to make the arts more central and meaningful in peoples’ lives, in our communities, and in our societies. Musagetes works in Guelph, Lecce (Italy), and Rijeka (Croatia) to demonstrate how art can be participatory and socially engaged, to establish a greater sense of belonging in communities.

The International Institute for Critical Studies in Improvisation is a partnered research institute comprised of 56 scholars from 19 different institutions, hosted at the University of Guelph (with project sites at McGill, Memorial, Regina, and UBC). The Institute’s mandate is to create positive social change through the confluence of improvisational arts, innovative scholarship, and collaborative action.

The mission of the Laurier Centre for Music in the Community (LCMC) is to provide a scholarly research environment that considers and explores the musical lives of people in the community, and the resulting applications of musical practice on people and institutions. The fundamental belief that music has many meanings and takes many forms is central to the philosophy of LCMC.
-30- 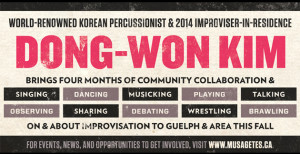