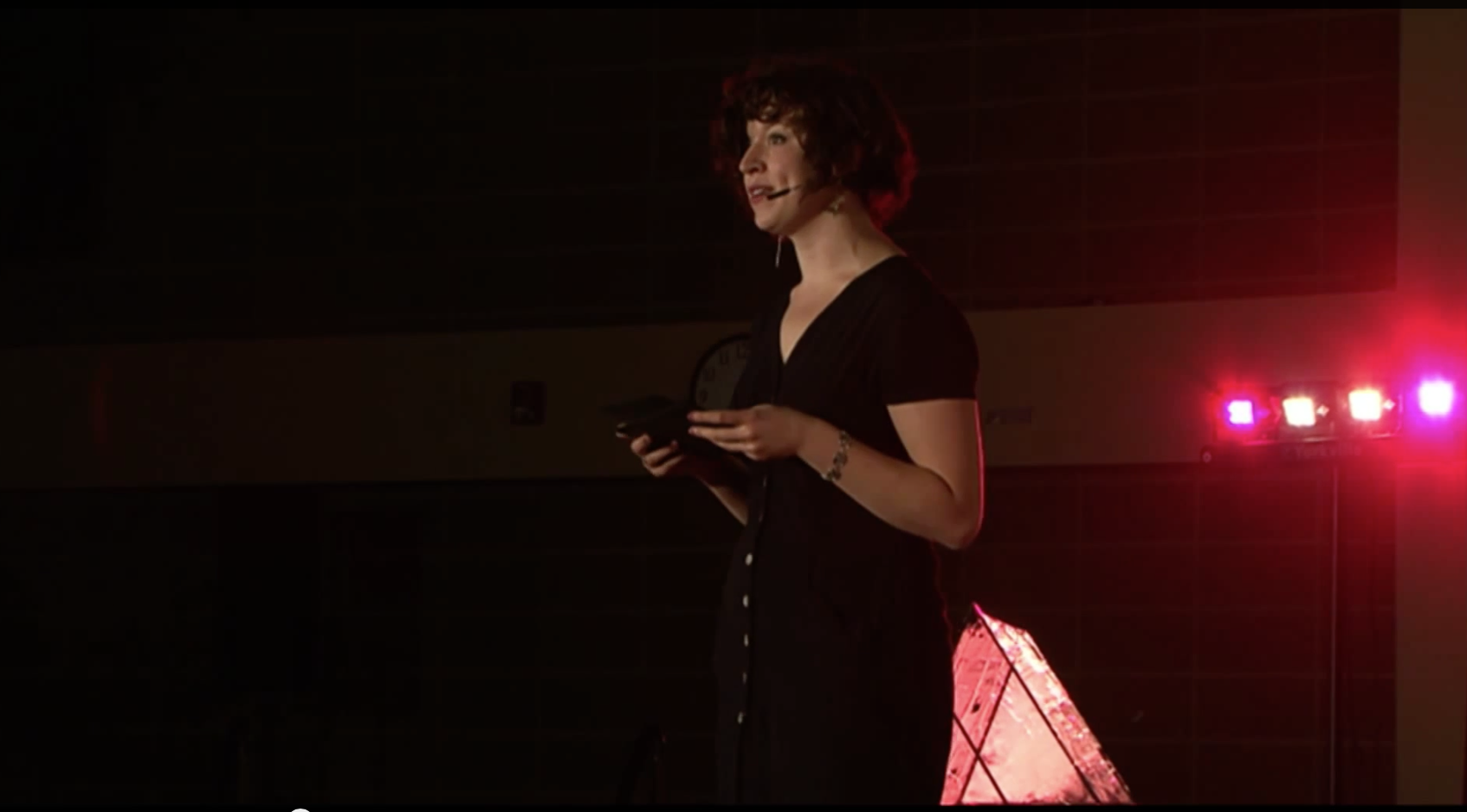 Musagetes Program Coordinator Danica Evering spoke at TEDxGuelphU last November. Here’s the video and a transcript of the talk!

I want to tell you about stories, about pens and swords, and the people and communities who wield them. It’s kind of difficult for me to tell this story, because there are so many stories like this one. This story about stories and has been told by many voices, some more experienced or knowledgeable than mine. But—and I think this is key—there is something to be learned in each new telling, in each re-interpretation or reframing of a story.

In his Massey Lecture, The Truth about Stories, author Thomas King begins with a quote from the Okanagan storyteller Jeannette Armstrong. She says, “I am a listener to the language’s stories, and when my words form I am merely retelling the same stories in different patterns.” I live in a world where new songs can be created from old tunes, where used clothes are cut up and re-purposed into new designs, where amateur enthusiasts hack consumer products, creating items of their own fashioning more appropriate to their needs and desires than the original product. It might seem strange to invoke old stories—these old songs about love and loneliness and longing—in a lecture series dedicated to sharing new and innovative ideas, but there is something potent in these old stories that keeps us turning back to them.

I remember being windswept at the top of Hadrian’s Wall in northern England and poking about these old Roman ruins, nestled amongst the hushed muttering of tough grasses and the clamouring of lost sheep. And in the latrines, there was a panel (as there often are in these sorts of ruins) that had English translations of the original Latin graffiti that had been scrawled onto the wall. And they said things like, “Lucia was here” and “For a good time, see Maximus in Baker’s Lane.” And I mean, it’s a simple thing, but the point is worth noting—that hundreds and hundreds of years later, we’re still telling the same stories (as the bathroom walls at the Jimmy Jazz will no doubt attest). We’re declaring our existence in the world, trying to make ourselves immortal by adding our own voices to this song of humanity. Even as we discover new techniques and acquire new knowledge in science, art, design, and technology, we are re-samplers of culture, building hybrid identities by telling old, old stories in new configurations. And it is in each new telling that they acquire power. So there are many different ways to tell this story about stories, but this telling is mine.

I’ve always told myself stories. Most of us have done it at some point. It starts almost before we start remembering—we hear the trees talking, make cities from stones, drag invisible friends out of the shadows of abandoned lots. I was eight, or somewhen around that anyway, and I had some chores to do—sorting laundry into piles in my parents’ musty basement. We lived on a residential street that used to be a swamp, and the concrete walls were always cold. Toads would occasionally congregate, croaking hesitantly, outside the downstairs windows. I was sitting there in the murky half-light, sorting: red t-shirt in the warm colours pile, a bra and a rank pair of running socks in the whites, the weighty thump of a pair of black jeans crumpling resolutely into the darks. Yearning to be more than just a tiny girl chucking her family’s clothes around, I made up this spirited proletariat story: Hard labour! Not enough pay! I even wrote a little song, timed to the satisfying thud of each piece of laundry. “Work, work, that’s all I do…” And it would be easy to write this off as a game, as a conjured wool scarf (into the delicates for hand-washing, naturally) able to ward off the chill of ennui. But it seemed more important than that to my fierce small self then, and it still feels important now. It was in this narrative revisioning that the mundane became more livable and drudgery became golden in this new imagined narrative light.

They are powerful things, these narratives we tell ourselves, whether we are small or more grown up and beginning to coalesce into groups of people. Sometimes a story works within the dynamic of a community and makes a proposition that stretches the bounds of what we believe is possible. I work for a Guelph-based international organization called Musagetes that makes the arts more central and meaningful to people’s lives and in our communities. The stories we spark through participatory and socially-engaged artistic projects often take on lives of their own within these communities. They become something new to each new person that interprets, hears about, or talks about an event, as people make sense of what they’ve experienced.

Between a Rock and a Hard Place was a one-day concert tour created by Dutch artists Bik Van der Pol that Musagetes produced in Sudbury last summer just as the nights were starting to get chilly. It was a series of punk, folk, rock, classical, and electronic concerts by local bands. Eleven bands reclaimed eleven pieces of exposed Canadian Shield blackened by many decades of mining by using them as stages for one eleven-hour day. And a bus packed full of people etched an alternative map of the city both physically and metaphorically as it brought the audience to each site. The day was rich with seams of stories. One singer played an acoustic set on a piano that a small army of people had carried up to the top of a bluff earlier in the day, the keys sticking in the wet, a sea of grins fed by pouring rain that slicked hair to faces and soaked socks sopping throughout the day. Or a small but dedicated group of cyclists who followed the bus from site to site on their bikes. This was a one-time experience: one bus, one city, one day. And when the bus reached its last stop and the last notes bounced back from the underbelly of the decommissioned Sudbury water tower, the location for the last concert,the last beam of pink and green light snuffed out with a last puff from the fog machine, the harmonic overtones of this incredible myth resonated within the voices of the community. It drew out the oldest memories of the rocks, of the meteor impact that still slightly shakes the earth and created the nickel seams. It took those memories and brought them into conversation with both the histories of mining and industry and the new energy of the music scene to tell a story of what was possible
in Sudbury.

This new story was ripe with new potential and critical complexity, and in an age of slogans, stereotypes,and band-aid solutions that is sometimes a difficult thing to accomplish. I would really love to tell you that all it would take is for you to pull up your socks, hold your head higher, eat a little bit more kale, breathe deeper, write a letter or blog or manifesto or to do list, get into your power stance, and breathe a new story into yourself, or your community, or our society and it’ll change. But—it’s far more intricate and emergent than that. Some stories are told so many times by so many people that these stories become platitudes: deep ruts worn through to the bare earth of our identities. And though we might try to forge a new path by telling a new story, it can be really hard to avoid that rut. We have to be insistently careful about the stories we’re telling, and re-telling. Sometimes, they’re the clearly false stories we tell ourselves about our societies and nationalities—like the ridiculous assertion that our country doesn’t have a history of colonialism. Closer to home, Guelph has built an identity around our left-wing green politics and eco-activism that brought a provincial candidate from outside of our city here because he had a greater likelihood of being elected here. And one telling of this is story is indeed true—but such stories sweep lived experiences of inequality and exclusion deftly under the narrative rug. They let us sit (self-righteously albeit rightfully) proud of our refillable water bottles and solar heating, and let us conveniently ignore the important issues of social justice in our community—the access to resources in Guelph’s suburbs, or the continuously displaced people within our downtown core. We use these stories as comforting smokescreens that allow us to rest complacently while excluding historical truths.

If we want lasting change and new growth, we have to reach deep into the threads of our old stories. This is a painful process, I know it is. There are things that have happened to each one of us we would rather forget and bury deep in the past rather than take up and examine again. There are things about our countries we need to own and, yes, perhaps be ashamed of. But we have to stop ignoring the dropped stitches in the fabric of our lives and societies in pursuit of the superficial and comforting. Instead of always striving for the next new story, we can revisit our old ones. Instead of discarding these uncomfortable narratives, we can sit with discomfort, patiently teasing out warped weft and tangled snarl to weave a new pattern. And it is in this reparative re-telling that a whole story can emerge, one that includes the multitude of stories, painful and beautiful, that make up our selves and our communities. We can work with our culture of re-sampling, building hybrid patchwork identities that tell old stories in critical and thoughtful new ways. We can choose complexity, truth, and reconciliation instead of selective histories. We can tell the stories that pick up dropped threads and forgotten narratives to make a more honest, rich, and varied cloth out of the old stories we’ve been telling ourselves: the reworking of the story that can begin to change everything.