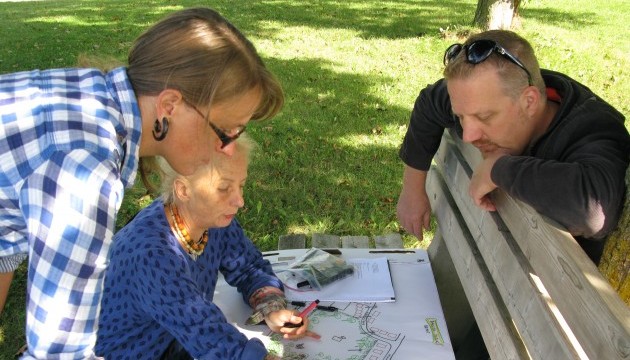 Lucia Babina is a cultural producer based in Rotterdam, Netherlands. In her practice she collaborates with artists, experts from different disciplinary strands and local inhabitants, in order to give people a voice, to stimulate  a sense of belonging, and to envisage opportunities of reclaiming the right to decide the way we want to live. She is founder of iStrike.ultd – organization for international exchange – and of Cohabitation Strategies – cooperative for socio-spatial development. She has realized several relational works, such as: MAN (Market Academy Naschmarkt), Vienna 2010; The Cook, The Farmer, his Wife and their Neighbour, (Amsterdam 2009); Moving in Free Zones #2 (Rotterdam 2009).  (www.luciababina.net)

Marjetica Potrč is an artist and architect based in Ljubljana, Slovenia. Her work has been exhibited extensively throughout Europe and the Americas. Her many on-site projects using participatory design include Dry Toilet (Caracas, 2003) and The Cook, the Farmer, His Wife and Their Neighbour (Stedelijk goes West, Amsterdam, 2009). She is the recipient of numerous grants and awards, most notably the Hugo Boss Prize (2000) and the Vera List Center for Arts and Politics Fellowship at The New School in New York (2007). (www.potrc.org)