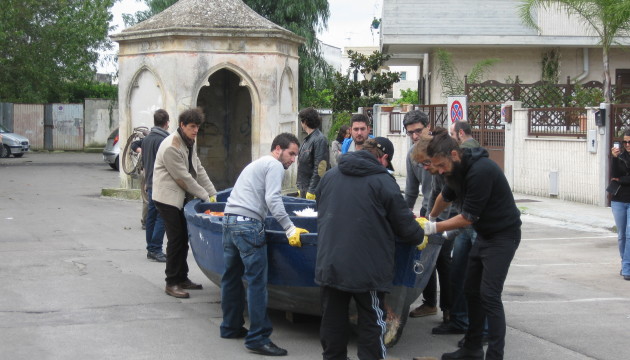 The Celebration of the Living (Who Reflect Upon Death), Lu Cafausu, San Caesario, 2010. Photo by Shawn Van Sluys.

Over the last few years Lu Cafausu has been involved in a kind of aesthetic and anthropological investigation, dealing with the contradictions of both urban and metaphorical spaces, the “self-generated” beauty (by chance or necessity), and the “errata” of the landscape.

Lu Cafausu, an old coffeehouse located in a small town in the south of Italy, has become the inspiration for stories, performances and actions in different European and American cities.

The collective identified Lu Cafausu as a metaphor for something that is, at the same time, both central and marginal, where aesthetic contradictions meet the meanings (or maybe the lack of any meaning) of our time. It’s “an imaginary place that really exists.”

Lu Cafausu is a collaborative art project initiated by Emilio Fantin, Luigi Negro, Giancarlo Norese, and Cesare Pietroiusti in 2006, then joined by Luigi Presicce in 2010.

Luigi Negro is an artist, sociologist and historian of the economics; lives in Lecce, Italy. The curating process for Negro is a tool for managing complexity and chance. The artist should build the world, creating devices for relation and sense, making “encarte”, conceiving dynamic maps with nexuses, emotions, actions, and rules. Curating as a form of art. He has been exhibiting in both collaborative projects (Progetto Oreste, Synapser, UnDo.Net) and solo shows.

Giancarlo Norese lives in Milan and Florence, Italy. He was one of the initiators of the Progetto Oreste and the editor and designer of its publications. Since the mid-Eighties he has been involved in many collaborative art projects, mostly dealing with precariousness, the metaphors of the public space, the mistakes of the landscapes, and self-generated beauty. As an individual artist, he is interested in formless forms of art.

Cesare Pietroiusti lives in Rome, Italy. With rigorous and analytical spirit, Pietroiusti transforms life experience in art, exploring small events, paradoxical situations or problems hidden in the turns of an ordinary existence. Pietroiusti, extremely thoughtful towards the collective dimension and interested in the relational and “public” aspects of art, was one of the founders of the Centro Studi Jartrakor in Rome and of the journal “Rivista di Psicologia dell’Arte”; in 1997 he was one of the initiators of the Progetto Oreste.

Luigi Presicce, born in Porto Cesareo in 1976, lives in Florence and Porto Cesareo, Italy. After having received a BA at Accademia di Belle Arti di Lecce he moved to Milan. In 2007 he attended the Advanced Course in Visual Arts at the Fondazione Antonio Ratti in Como. He has been one of the founding members and director of Brownmagazine and Brown Project Space (with Luca Francesconi and Valentina Suma), which was founded in Milan in 2008.

The Celebration of the Living (who reflect upon death), 5th ed. (November 2014)