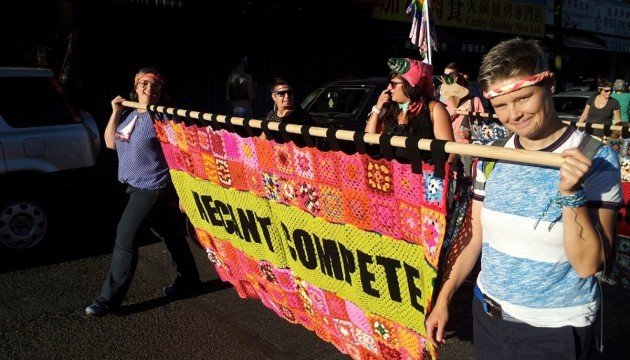 Deirdre Logue holds a BFA from the Nova Scotia College of Art and Design and an MFA from Kent State University. Her performance based film, video and installation works are self-portraits uniquely located between comfort and trauma, self-liberation and self-annihilation. By using domestic objects and spaces to contrary ends, her works capture gesture, duration and the body as both subject and object. Recent solo exhibitions of her award winning work have taken place at Open Space in Victoria, Oakville Galleries, the Images Festival in Toronto, the Berlin International Film Festival, Beyond/In Western New York, YYZ and at articule in Montreal. She was a founding member of Media City, the Executive Director of the Images Festival, the Executive Director of the CFMDC and is currently the Development Director at Vtape.

Allyson Mitchell is a maximalist artist working predominantly in sculpture, installation and film. Since 1997, Mitchell has been melding feminism and pop culture to play with contemporary ideas about sexuality, autobiography, and the body, largely through the use of reclaimed textile and abandoned craft. Her work has exhibited in galleries and festivals across Canada, the US, Europe and East Asia. She has also performed extensively with Pretty, Porky and Pissed Off, a fat performance troupe, as well as publishing both writing and music. She is an assistant Professor in the School of Women’s Studies at York University.