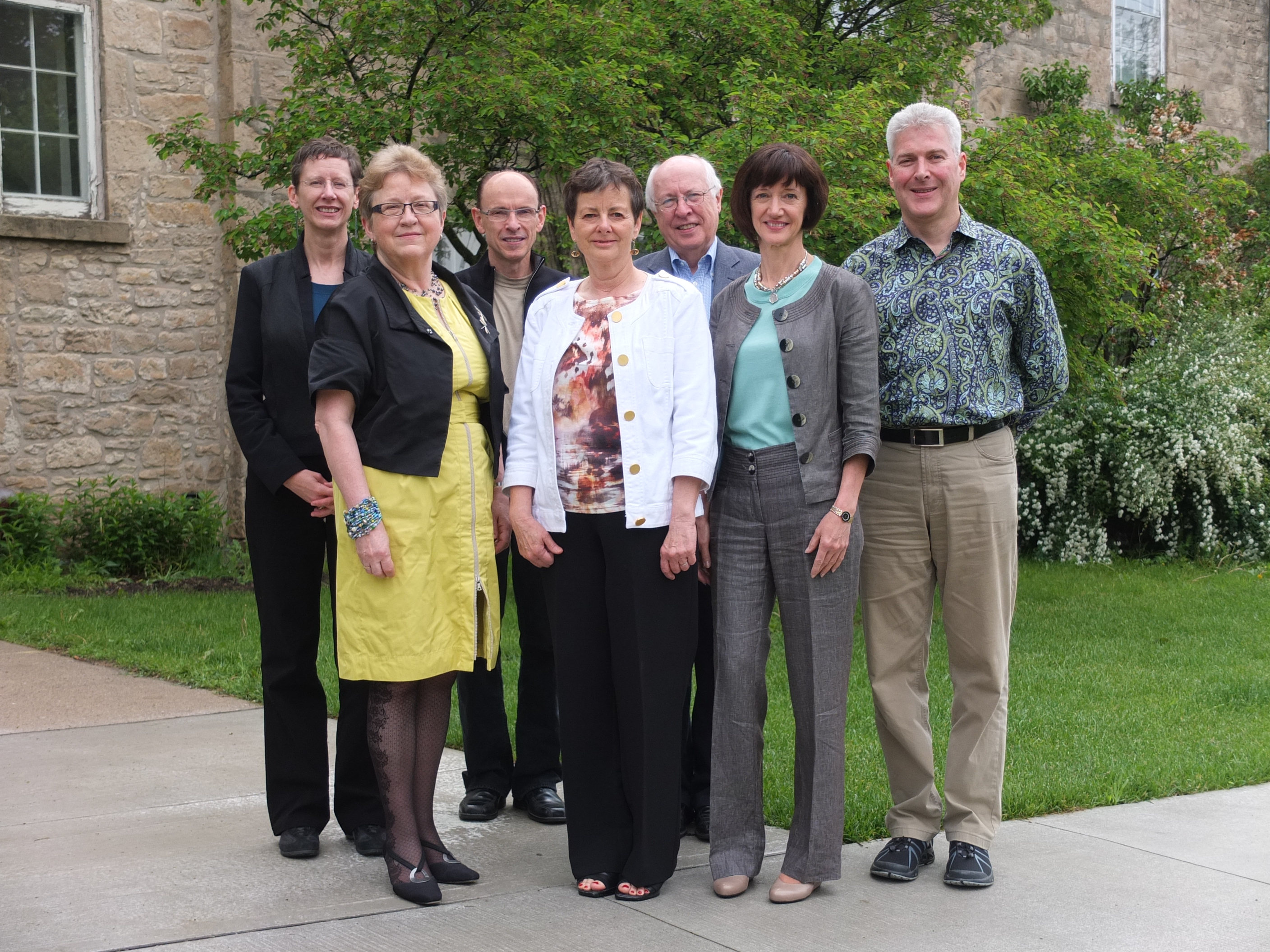 Joy is a founder and director of the Musagetes Foundation. For 20 years, she has been trying, unsuccessfully, to be retired. Instead, she finds herself volunteering, and sometimes consulting, in the areas of fundraising, management and planning, particularly related to the start-up of organisations and all aspects of strategy to achieve collaborative, experimental approaches to organisational development. Her experience includes 15 years in public relations for the University of Waterloo, where she established the first alumni affairs office. With a partner, she subsequently founded, managed and sold a private software company that used open standards to develop documentation software. She has conducted research inside some of the country’s largest organizations and has worked extensively for small business owners and not-for-profit agencies. She holds a Ph.D. from the University of Waterloo in Rhetoric, a field concerned with human motivation and persuasion. She is a founder and/or board member of a number of not-for-profit organizations. Previous positions include board member at the Centre for International Governance Innovation (CIGI), Planned Parenthood Waterloo Region, THE MUSEUM (formerly the Waterloo Regional Children’s Museum) and the KW Art Gallery. She is a Director of the Eramosa Institute, a member of the Campaign and Community Cabinet at the rare Charitable Research Reserve and an Associate Practitioner at Social Innovation Generation (SIG@Waterloo) at the University of Waterloo.

E.M. (Yeti) Agnew is a Toronto based trusts and estates lawyer who is convinced that the arts and artistic thinking are fundamental to increasing the quality and appreciation of life for everyone on our planet.
She started volunteering in the arts as director of A Space (an artist-run centre). Subsequently, she has included service as a Trustee of the Royal Ontario Museum and as a Governor of the University of Waterloo among a variety of other positions.
She will be honoured as one of UW’s 60 outstanding alumni on the occasion of the University of Waterloo’s 60th Anniversary.

Michael Barnstijn and Louise MacCallum are the Benefactors and Founders of the Musagetes Foundation. They were software engineers at RIM until Louise retired in 1997 and Michael in 1998. Michael was the first full-time employee hired by company founder Mike Lazaridis. He later became a partner and played a major role in the creation of one of today’s most well-known wireless devices, the Blackberry. Since retiring Michael and Louise are pursuing an unintentionally active retirement involving arts and culture, philanthropy, and child rearing. They are actively involved in a number of charitable organizations that work toward their vision of a society that is socially more just, environmentally more sustainable and aesthetically more beautiful. They have a deep commitment to the environment and conservation and are passionate about the importance of the arts. Michael’s continuing passion for photography began with a folding bellows camera when he was 12. Louise enjoys playing the cello. They have been cited as leaders among “a new generation of volunteers and philanthropists.”

Valerie Hall is President of Stonefields Management Inc. Trained as a teacher, Valerie has, for the past 20 years, put her expertise to work for not-for-profit organisations across Waterloo Region. Her fundraising and community relations skills have earned her the “Fundraiser of the Year” award from the Waterloo Wellington Fundraising Executives. She holds an Honours BA in Political Science and History from York University. She is currently President of the Eramosa Institute and a founding member of the Musagetes Foundation.

Doug is a founder and member of the finance committee of the Musagetes Foundation. He is a retired business executive, most recently Senior Vice President at CIBC, Toronto, and Chief Financial Officer of its CIBC Development Corp unit, involved in commercial real estate development and management, and distressed loan portfolio purchase and workout.  He is a Chartered Professional Accountant and a Fellow of the Chartered Professional Accountants of Ontario. Prior to joining CIBC, he was Sr. Vice President and Treasurer at Cadillac Fairview Corporation and before that a financial officer of Genstar Limited. He articled for his C.A. designation with Peat, Marwick, Mitchell & Co., now KPMG. He has been an active volunteer fundraiser for several organizations. He served two terms on the Board of Governors of the University of Waterloo, was a member of Executive Committee and chaired the Audit Committee. He is a Director of the Eramosa Institute and a member of the Campaign and Community Cabinet at the rare Charitable Research Reserve.

Dr. Frances Westley currently holds the J.W. McConnell Chair in Social Innovation and is the Director for the Waterloo Institute on Social Innovation and Resilience at the University of Waterloo. She is a renowned scholar and consultant in the areas of social innovation, strategies for sustainable development, strategic change, visionary leadership and inter-organizational collaboration. Frances Westley received her Ph.D. (1978) and M.A (1975) in Sociology from McGill University (1978), and her B.A. in English Literature from Middlebury College (1970)

Tim Brodhead was, from 1995 to 2011, President and CEO of The J.W. McConnell Family Foundation. In 2013-2014 he served as Interim President of the Pierre Elliot Trudeau Foundation. Prior to joining McConnell, Tim spent twenty-five years working in international development, mainly in West Africa, Sudan and India. He was the Founding Executive Director of ACORD, based in London U.K., and co-founded the Canadian development agency Inter Pares.
Currently Tim co-chairs Canadians for a New Partnership and is a board member of The Natural Step, Engineers Without Borders (EWB-Canada), the Arctic Inspiration Prize, the Fondation Lucie et André Chagnon, and the Jarislowsky, Omega, Inspirit and Ottawa Community Foundations. He is a member of the Waterloo Institute for Social Innovation and Resilience (WISIR) and is on the Advisory Boards of the McGill Institute for Health and Social Policy, and the Children and Youth in Challenging Contexts Network.
In 2001, Tim was appointed an Officer of the Order of Canada. He holds Honourary degrees from McGill, Carleton and Dalhousie Universities and the University of New Brunswick. He lives and farms south of Ottawa.

John English is the director of the Bill Graham Centre for Contemporary International History at Trinity College at the University of Toronto.  He is also Distinguished University Professor Emeritus at the University of Waterloo, Distinguished Senior Fellow at the Munk School of Global Affairs, and a Senior Fellow at Massey College and Renison College.
He is a Fellow of the Royal Society of Canada and an Officer of the Order of Canada.

Simon Brault is Director and CEO of the Canada Council for the Arts.  Author of No Culture, No Future, he has been a driving force behind a number of major projects and has held key positions in national organizations including the National Theatre School of Canada. An initiator of Journées de la culture, he was a founding member and Chair of Culture Montréal, and has been a board member of the International Federation of Arts Councils and Culture Agencies (IFACCA) since 2016. He is a sought-after speaker and, in 2017, represented Canada as a cultural expert at the first G7 on arts and culture.  Simon Brault has received numerous distinctions for his commitment to the social recognition of arts and culture.